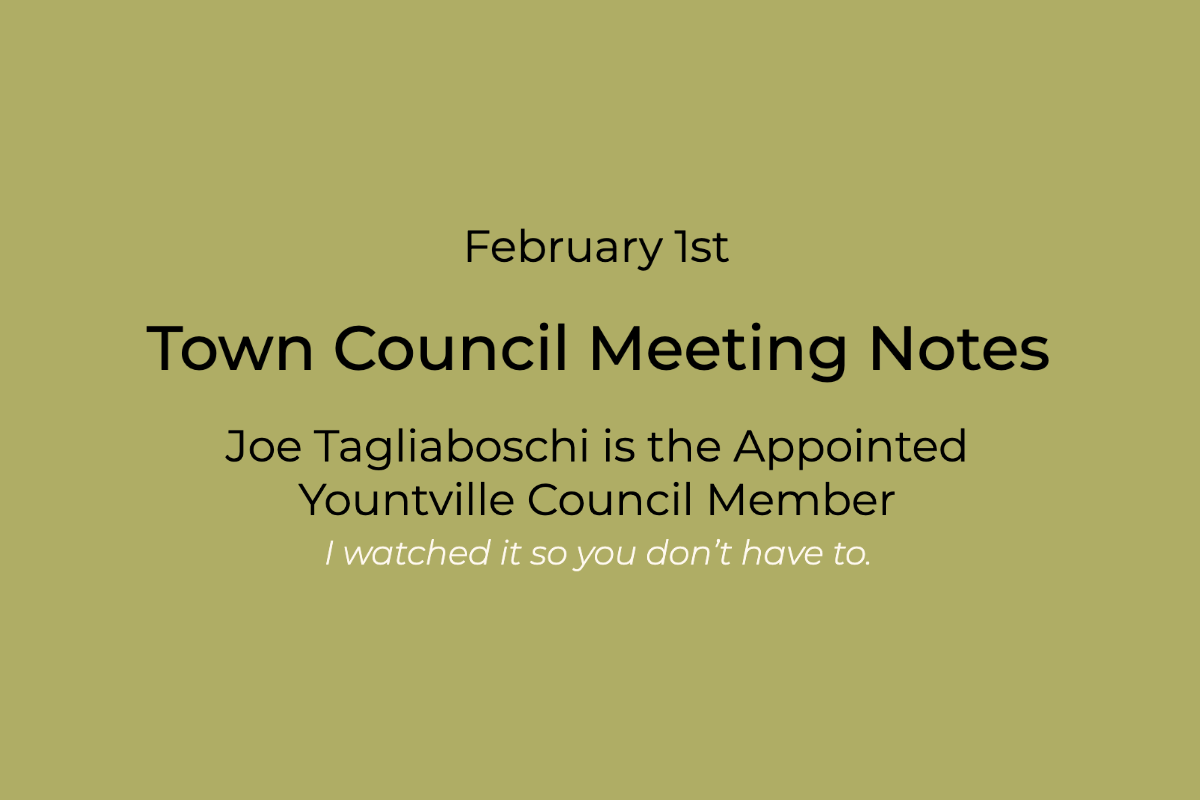 Many of you know the outcome, but do you know the confusion on the final vote for the appointment to the Yountville Town Council? Do you know what it means to vote Present? Can you change your no vote? Once again, this week, we get confusion, resulting in an education in government rules and procedures for us and, more importantly, the same Council member who had issues in a previous meeting. Yes, they chose a Vice Mayor!

Joe Tagliaboschi has been appointed to fill the vacant Council seat in Yountville. Our newest Councilmember will have to campaign for the seat in the upcoming November election if he wishes to keep it. At that time, the seats of the Mayor, who is running for Napa County Supervisor District 3, Joe’s seat, and current Vice Mayor Marita Dorenbecher, will be up for election. We got a dress rehearsal for that election this evening. (see that? I gave you a hint as to whom they chose for the new Vice Mayor)

Not to be outdone with the anticipation of who would be appointed, the Town of Yountville started the meeting 27 mins late. It turns out we could watch the proceedings on local Channel 28, but Youtube and the Town website would not cooperate. We are 24+ months into this Zoom cycle; I hope more prep goes into future meetings to ensure a smooth evening.

Unfortunately, candidate Robert Moore withdrew 30 mins before the scheduled meeting. It appears the Vets Home’s internet was down, and he could not connect. The Town did offer other accommodations for him, but Mr. Moore only has a desktop computer and could not travel. As was explained by Town Manager Steven Rogers, “he is sincerely interested in this position.” I believe this as I have met Robert in person, and I know we will be seeing more of him in the next ten months.

The process for the interviews with the remaining four applicants proceeded as follows: they would go in order of when their application was received, give a three-minute introduction, asked a predetermined question by each Councilmember and Mayor (written before the meeting by the Town Manager), and then a closing statement. All in a 15-minute time frame.

In my previous posts, I have provided you with all their applicants and additional questions posed by The Yountvillian. I have included the documents at the end of this post with a link to the meeting to hear their answers directly. So I am just going to focus on the three-minute introduction. It speaks to the candidates as individuals.

Robert Stout spoke of being a “military brat,” veteran, CPA, accountant, extensive work with governmental accounting, helped establish auditing rules, even worked with others (and House of Reps and Senate) to write federal law for accounting for local governments and wrote the financing plan for the City of Vallejo to exit bankruptcy, an ambassador with the Chamber, loves this Town, eats out a lot. Joe Tagliaboschi spoke of living here since 1990, Kiwanis, Bicycler Advisory commission, NVTA Advisory Commission, Public Works Director of Yountville for seven years, felt all the friendships he has in Town is a positive, proven independent leader and thinker, and he has the support of the previous Vice Mayor as well as honorable, truthful, and forthright Hillery Trippe spoke of moving here in 2019 to be closer to family, college background, working in Berkeley as a lawyer for real estate development, assistant general counsel at C&H Sugar and working with the Crockett Community, financial manager for risk management, and working with actuaries, open-minded decision making, active, open dialogue with the residents. Lastly was Doug Yarris, who spoke of the honor to serve, passionate and hardworking; he is the only applicant not retired and is actively engaged with our community with a wine tasting room, volunteer, compassionate, has Silicon Valley experience, and spoke of Steve Jobs who worked until the end, “…because there is so much to do”, tireless, ask questions, and is a work in progress.

As the applicants were shuffled around Zoom “rooms” to be able to hear the discussion and the final decision, Town staff prepared to read every Public Comment that was submitted for the appointment item. Thirty-five letters were read and placed into the record (and I believe a few were missed but still became part of the record). It was like listening to a horse race announcer with two horses running, Joe and Hillery; back and forth, forth and back. Each letter with a list of reasons why the Council should appoint their selected person.

Then there was time for the Council comments with four Councilmembers to appoint one person to fill the vacant seat. Mayor John Dunbar asked for volunteers and, seeing none started with Councilmember Knight. He read from his prepared statement as he wanted not to miss any points. He supported Hillery Trippe because her extensive business and public affairs experience would offer innovative and fresh ideas. He clearly explained how her career and volunteerism would help her listen better and actively collaborate. Because “dialogue, listening and collaborate is how we best represent the community.” He then went on to describe his conversation with Joe Tagliaboschi and how he encouraged Joe to run for Council or Mayor because “that is when we need him most.” Hillery is “transformative change for Council now.”

Councilmember Mohler spoke of the fact that this is a position for ten months and spoke of the importance of the upcoming conversations on the budget and housing element with a lot of community engagement. So, we need someone to “step in right away and get this work done,” as well as a “steep learning curve.” This person needs to get us through the next ten months. She reminded the public of former Councilmember Steve Rosa, who retired from the Yountville Public Works, and he brought an interesting perspective to the Council. With that, Councilmember Mohler supported Joe Tagliaboschi.

Mayor John Dunbar finished the conversation detailing the qualifications of each individual applicant and the qualities they possessed, thanking them all. He even offered insight into their future opportunities for the Town Council. He then spoke of Joe and reiterated a Public Comment made earlier that Joe would always answer the phone, “This is Joe, how can I help.” Dunbar said he is most qualified. He recounted Joe’s retirement as they celebrated him as a person. He has the relationships and contacts that are just as necessary throughout the entire County. Mayor Dunbar was also throwing his support behind Joe Tagliaboschi to fill the vacant Council seat.

Councilmember Mohler made a motion to appoint Joe Tagliaboschi (Joe T. from this point forward, I can’t continue to type the last name), and Councilmember Dorenbecher seconded the motion. After confirmation from the Town attorney that this was a Minute Order and would be approved at the subsequent meeting when the Minutes are approved, Mayor Dunbar asked for a voice vote. The final vote was 3 -1, with Councilmember Knight voting no. WAIT FOR IT. IT’S COMING. So, before the Town Clerk could finish her confirmation with the Mayor confirming the vote, Councilmember Eric Knight asked to… CHANGE HIS VOTE! “May I ask a request and a question? I would like to ask the process to change my vote.”

The Mayor asked the Town attorney, Gary Bell, with the votes being cast, what would be required to change a vote? Mr. Bell explained that a Motion to Reconsider would need to be made and seconded by one of the three who voted for it and that there was no procedure in the Town protocols for changing the vote. With that, Councilmember Knight explained, “I don’t mean to be dramatic about this. I didn’t intend to change my vote for the person I voted for. It was just my effort to say possibly voting Present to honor our new colleague on the Council and secondly honor the fact that former Vice Mayor Dorman endorsed Joe for the replacement of her seat but because it’s more complicated I will stand by my vote and just wanted to express that comment.”

Voting Present, “most of the time, members of the House and Senate vote in the affirmative or negative on whatever proposal is before their chamber on a given day,” but in this case “you are simply acknowledging that you were present for the vote and are not contributing either to its passage or failure.” This is done during the vote, not after the fact and as Mr. Bell explained, the Town protocols do not have a procedure for changing your vote.

Also, “usually, voting present is done for some political reason or because the member who voted present has a conflict of interest with the issue under discussion.” I attached an article below to give you some insight into this process which is mostly happening on the state and federal levels. And yet, here we are on the Town Council, not knowing how to properly make a vote, stick by that vote, and show support. “Honor” for the future, and the past, with no idea how to get there.

Joe T. was sworn in and became Councilmember Tagliaboschi.

The first order of business on the agenda for the fully seated Council; appoint a Vice Mayor. Councilmember Mohler wasted no time in nominating Councilmember Dorenbcecher for the position of Vice Mayor, and as his first act, Councilmember Tagliaboschi seconded the motion. Mohler made the motion in “the spirit of solidarity.” The Mayor stated, ‘we have had our difference of opinion on this appointment, and we all work together well,” it is “important that we show we can walk the walk and don’t just talk about being unified.” The about-to-be new Vice Mayor stated she was “surprised and this is wonderful’ and a “new alliance that we all need to have going forward.”

Mayor John Dunbar gave what was his final State of the Town Address. Read the full speech.

The Consent Calendar was approved, including an item for purchase of a local home to ensure rental for workforce housing. Both Public Safety and CalFire gave their quarterly report reminding us all of how fortunate we are in our community with the level of service we are afforded. Shout out to Deputy Carillo for his diligent work on a local burglary and arresting the suspect and return of the stolen items.

Council voted to enact an emergency ordinance concerning SB 9. A mandatory state law that allows two home units on one lot. Given the details of the law, the planning department is creating an ordinance to better fit the requirements and how they affect Yountville. Town budget meetings have been set for May 5 and May 19, both at 1 pm. Get to know the budget on the Town website. A new fence to replace the chainlink fence at Yountville Park is going up at the Yountville Cemetery and the Town voted to support the effort with $23,000 towards the project.

Just like the ending of Mean Girls we have all learned a valuable lesson. Cady observes that “everybody looks like royalty” at the Spring Fling, and breaks the Spring Fling tiara apart, saying that everyone should share it (and causing Damian to gasp). She tosses a piece to Gretchen, a piece to Janis, and a piece to Regina, before tossing the rest of the sparkling tiara pieces into the audience. Sounds to me exactly like the Town Council meeting I observed today. Next meeting March 1.

Just want to thank you for giving clarification on that voting process.Even though I watched it again, I was still puzzled by that whole dialogue….
Also, I appreciate your wicked sense of humor :}

Fabulous on point discussion of last Meeting love reading your take on everything Jeff. !!! And yes your Wicked sense of humour