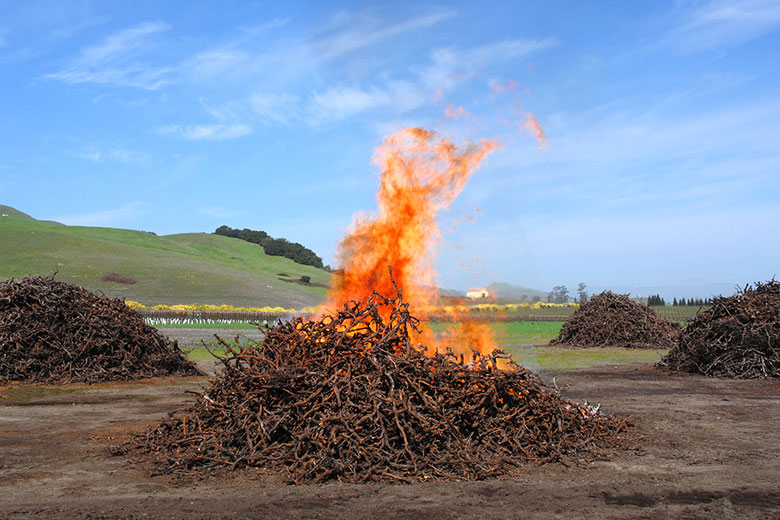 Agricultural burns have been part of Napa Valley and California’s robust agricultural scene for generations. Every winter, farmers, and vintners gather vines and other agricultural debris and burn them to get rid of them and make way for new crops. But with the changing climate and more pressure to reduce greenhouse gas emissions, agricultural burns may soon be a thing of the past. For most, it might seem like an easy decision to ban agricultural burns. They make the air smokey, cause irritation to those that have asthma or are sensitive to smoke, and now can even induce PTSD feelings from California’s yearly fire season, but farmers say it is not as simple.

The Napa Valley Grape growers created a “Vineyard Burning Task Force” in 2015 to address the growing concerns around agricultural burnings. The task force is comprised of growers, leaders in sustainable practices, and experts in fire science. The task force created a three-year plan to reduce smoke and preserve air quality in Napa Valley by 2018.

The task force set up a six-step approach to reach vineyard owners and reduce smoke in the valley. This approach focuses on the best sustainable ways to remove vines and prepare them to burn. In theory, if farmers follow these steps and use best practices, Napa Valley’s skies should be less smoky on burn days. The six steps are:

The program is promoted in both English and Spanish. The techniques in the six-step program facilitate effective vine pulling, proper vine drying time, removal of excess first, and then tarping to keep the center of the piles dry when it rains to reduce smoke. The results of these six steps are now known as “NVG’s Low-Smoke Agricultural Burning Program”.

So is it working? The Air Quality Review Board would say no. Agricultural burns are not just a Napa County issue but a broader California issue. In February 2021, the California Air Resources Board voted unanimously to crack down on agricultural burning in the San Joaquin Valley to end almost all burning by 2025. This decision comes two decades after voters passed laws in California to try and steam the burning. In 2003, state lawmakers passed legislation to end burning in San Joaquin Valley by 2010. So what was the hold up in a community where more than double the national average of children have asthma? The board was unwilling to crack down on the new rules following an outcry from farmers who claimed the new regulations would cripple their operations. Those concerns are still present today, with farmers claiming it will cost them tens of thousands of dollars to do away with their agricultural waste through chipping or other environmentally safe methods.

Napa Valley vintners say the same thing. Most are not yet willing to move entirely away from burning. The Napa Valley Grape Growers Task Force website is an entire section dedicated to why burning is essential. They claim that “Burning is an essential practice with no known alternative when it comes to mitigating risks associated with pest and disease issues.” They worry that if they are forced to use chipping methods, pests would easily be transported around the valley.

Whether they are ready for it or not, it might be coming. With the passing of regulations in places like San Joaquin Valley, the California Air Board likely could turn its attention to Napa Valley. With the increase in fire activity and an ever-present drought, many residents are ready for agricultural burning to end…no matter how well regulated it currently is.

This is certainly a topic that a lot of locals have an opinion about and these opinions can make a difference in how the County moves forward with regulations and policies. Read the opinion of the Editor, Jeff Durham, on the matter and reach out to the Board of Supervisors to make your voice heard.