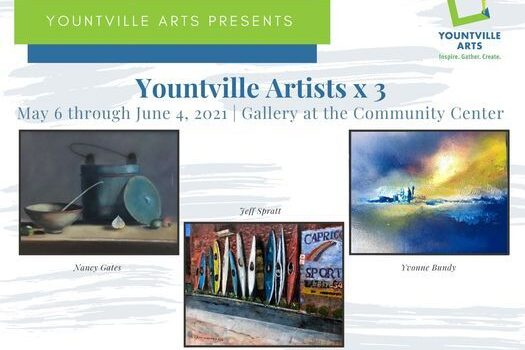 Nancy Gates enjoys creating realistic, atmospheric art using acrylics and pastels.  The subjects range from still life and animals to landscapes.  Born and raised on the East Coast, Gates was educated in the South and has lived in Paris, England, and Brazil before a move to San Francisco’s corporate world and eventually to Yountville.  She has always been interested in art and France, and her influences include Edouard Manet and Childe Hassam.  Gates has previously been a member of the Yountville Arts Commission and volunteered for the town’s Chamber of Commerce and the Napa Valley Museum.  She has studied with well-known artists through Napa Valley College, exhibited at local venues, and won ribbons at the Napa County Fair.

Yvonne Houbraken Bundy, a native of the Netherlands, moved to the United States at age 16. Yvonne’s grandfather lived in the same town as Vincent Van Gogh and watched him paint the family’s water mill. The grandfather would become an artist like his granddaughter.   Bundy used an artistic eye and skill as an esthetician when she operated her own skin care salon in Atlanta.  She also studied figure drawing at the College of Art in Atlanta.  Upon moving to Yountville in 2008, Yvonne took art classes at the Community Center.   Her work has been seen there and at the Napa Valley Museum.  Much of Bundy’s art today is acrylic brushed and sprayed on birchwood panels.  She builds up texture by adding small 1990’s era computer parts to her work.  Her inspiration is, of course, Van Gogh, as well as Salvador Dali and Henri de Toulouse-Lautrec.

Jeff Spratt paints from photos taken of people he has met, and places he has visited.  These images inspire him.  Before retiring, he had a career as a fashion merchandiser and designer of blue jeans and sportswear.  This developed his eye for creative expression, form, function, and detail in the competitive fashion marketplace.  Spratt grew up in Buena Park in Southern California.  He inherited the talent of his father, who was known in the neighborhood for painting an old shed to look like a full house.  Spratt began his life-long love of oil paint when he returned from Vietnam in 1970.  He was initially self-taught and inspired by the seascapes of Robert Woods, whose gallery he visited in Laguna Beach.  His current teacher is acclaimed Napa artist Michael Fitzpatrick.